How Does Nitrous Oxide Work? 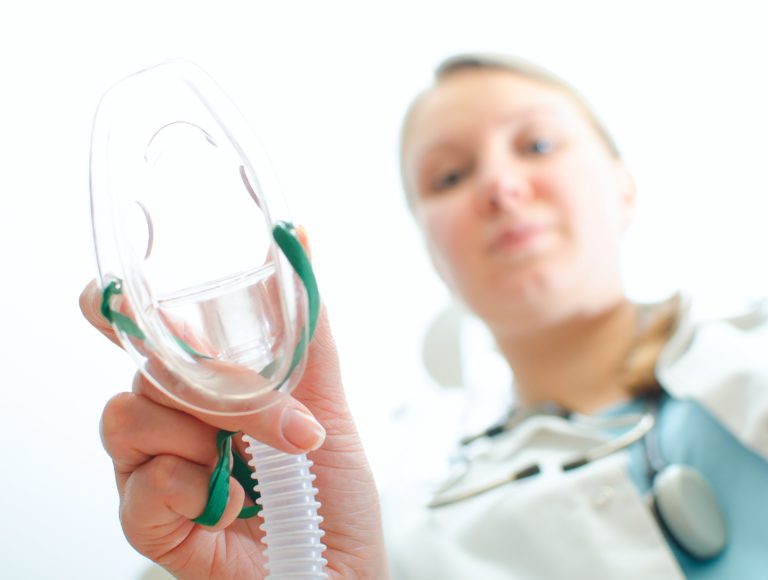 Nitrous oxide is used in many dental practices to help alleviate pain and anxiety during dental treatments. Commonly referred to as “laughing gas”, this chemical compound is a familiar way that many patients undergo a variety of dental procedures. But, what is nitrous oxide and how exactly does it work to rid the body of pain and anxiety?

Nitrous oxide is a colorless, odorless chemical gas composed of two molecules of nitrogen and one molecule of oxygen. At room temperature, some people report nitrous oxide having a slightly metallic taste, while others report this taste being sweet. Nitrous oxide is administered through a nasal hood that fits over the patient’s nose. The dentist will determine the combination of N2O-O2 gas, turn on the machine and then the machine will pump the gas into the hood. All the patient has to do is inhale normally to receive the gas. Through inhalation, nitrous oxide will reach the brain in twenty seconds and will begin inhibiting pain receptors approximately two to three minutes after the initial inhalation.

Although nitrous oxide was first synthesized in 1722 and popularized around 1798, it was not until Horace Wells used it to demonstrate insensitivity to pain during a tooth extraction in 1844 that nitrous oxide became used as a medical anaesthetic.

Despite its frequent use as an anaesthetic, the exact functioning mechanism of nitrous oxide is unknown. However, general trends have noted that nitrous oxide regulates ligand-gated ion channels in the body. Ligand-gated ion channels are channels that are composed of transmembrane ion-channel proteins. These channels open to allow ions like Na+ (Sodium), K+ (Potassium), Ca2+ (Calcium), and Cl (Chlorine) to travel through the membrane in response to the binding of a ligand (chemical messenger), like a neurotransmitter. Simply stated, ligand-gated channels regulate the flow of ions in the body and this flow of ions determines how chemical messengers, such as neurotransmitters, affect the body.

On a simpler note, nitrous oxide affects the body in three main ways. First, it has an anti-anxiety effect, which is caused by GABAA receptors that inhibit, or block, neurotransmitters. Second, it has an analgesic, or painkiller, effect caused by a chemical process that results in the brain releasing norepinephrine that inhibits pain signaling throughout the body. Finally, nitrous oxide has a euphoric effect due to increased stimulation of the reward pathway in the brain that releases dopamine.

These three effects on the body can be achieved throughout the various levels of sedation. Depending on the amount of gas a patient receives, they may experience different reactions in response to the sedation. Generally, patients describe feeling light-headed, tingly in their arms and legs, warm, euphoric, and sleepy. Some also experience a floating or vibrating sensation.

After the procedure, the patient is given pure O2 through a mask to completely flush any remaining NO2 out of the lungs and airway. During this time, the patient will gradually begin to return to their normal state. Patients will need to consult with their dentist about when they can eat and/or drive after receiving nitrous oxide, since it can hinder both appetite and ability to drive.