What is an Impaction? 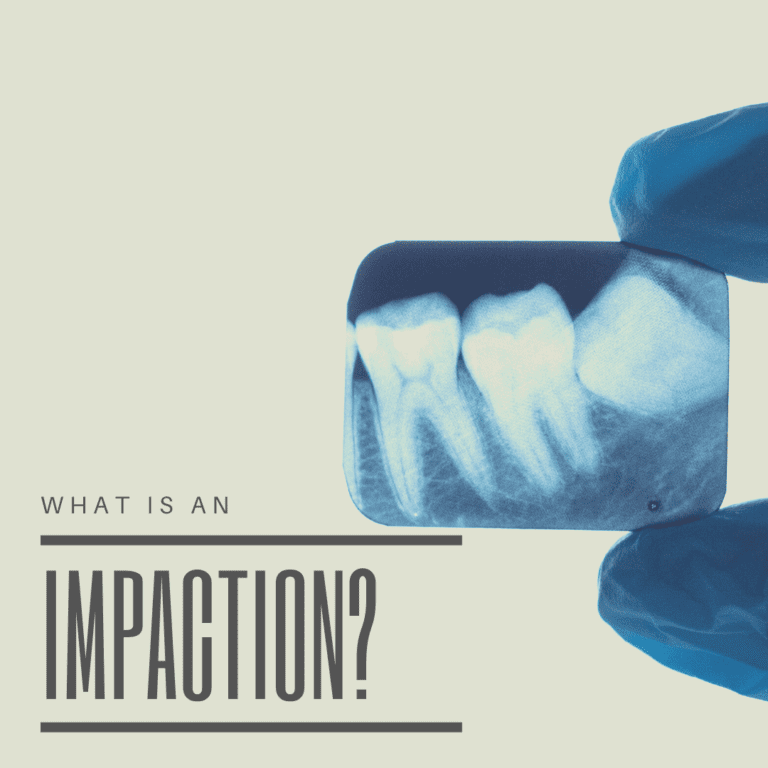 Despite their name, wisdom teeth can actually be quite problematic for your oral health. These third molars are the final set of teeth to erupt during the “wisdom years” of the late teens and early twenties. Although wisdom teeth don’t always come in, when they do they can cause a problem known as impaction. 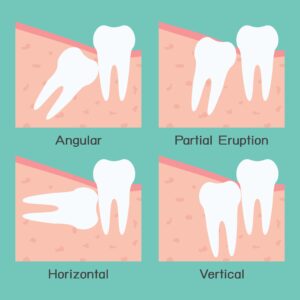 Mesial impactions are the most commonly-occurring type of wisdom tooth impaction. They are sometimes also known as angular impactions, since they are characterized by a partially erupted tooth that is erupting at an angle towards the front of the mouth.

A horizontal impaction occurs when a tooth is completely impacted and is sitting horizontally underneath the gums. Horizontal impactions are one of the most painful types of impactions, and can also cause a lot of damage. This is because the tooth will continue to try and erupt despite the fact that it is facing the wrong way, which causes it to press into the neighboring tooth root.

A vertical impaction occurs when a tooth is correctly positioned to erupt (meaning that it is facing upwards), however is unable to erupt. Vertical impactions do not always require treatment and most dentists will monitor them closely for a set amount of time to determine if treatment is necessary.

Do I have an Impacted Wisdom Tooth?

There are several symptoms of an impacted wisdom tooth, including:

– pain in the wisdom teeth area (back of the mouth)

– swelling on one or both sides of your face

– a sudden change in bite, such as an overbite or underbite

– a change in the way you chew

– pain with speaking or opening your mouth, as well as chewing and swallowing

– a foul taste in your mouth

– bleeding from the wisdom teeth area, or other areas of the gums and cheeks

In some cases, an impacted wisdom tooth may not cause any symptoms and may simply be diagnosed during a routine exam.

Treatment for an Impacted Wisdom Tooth

Treatment for an impacted wisdom tooth will vary depending on the level of impaction. Although rare, some wisdom teeth do not require any treatment at all. In many cases, however, impacted wisdom teeth will need to be removed with a surgical tooth extraction. During a surgical tooth extraction, your dentist will make a small incision in your gums to access the impacted tooth. The tooth will then be broken into smaller pieces and removed one piece at a time. Finally, the gums will be sutured and the area will be stuffed with cotton. In most cases, tooth extractions can be completed quickly and usually have a quick recovery period.